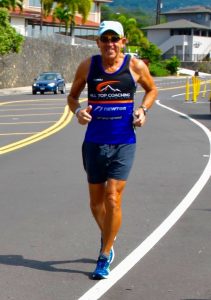 I first met Rob in Kona (where else?) in 2013 over a coffee. He is almost as passionate about coffee as he is Triathlons! A year or so later, I’d just about given up the idea of doing another Ironman – Never say Never!

However, at the beginning of ’17, I was feeling overweight & unfit & felt I needed something to get back ‘healthy’. I approached Rob who had become a friend to see if he would help me out as having done 7 IM’s including 2 Kona’s, I needed a new approach & some motivation. He agreed & we hatched a plan. I would do Port Macquarie 70.3 in early May & then Cairns early June. This was end January so I didn’t give him much time. He was brilliant; didn’t rush it; plenty of recovery time & not over-doing it.

I was lucky enough to win both: Cairns in an Age Group record & the coveted Kona ‘Slot’. Unfortunately, Kona didn’t go so well as nursing a dicky shoulder. However, with a lot of encouragement from Rob managed to get the Finish.

He has always been approachable, understanding & very knowledgeable.