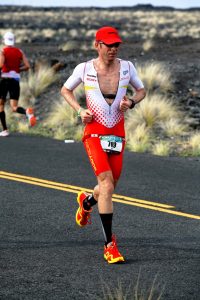 12th October 2013 was a great day for me.
Racing in my 7th Ironman Hawaii in Kona, I had what felt like the perfect race which resulted in a 20 minute personal best time on the Hawaii course.
The Hawaii Ironman is a triathlon consisting of a 3.8km ocean swim, followed by a 180km bike through the lava fields of the Big Island of Hawaii, with a hot and humid marathon (42km run) to finish.
There are a lot of Ironman-distance triathlons held all over the world these days but the Hawaii Ironman is something special.
As the World Championships, to compete you need to qualify through one of the other Ironman races and it is estimated that there are 70000+ triathletes trying to qualify for one of the 1800 slots at Kona. In addition to this, the Hawaii Ironman has 35 years of history with the sport’s very best having raced on the course. It all adds up to a great experience being one of the privileged few who get to compete against the best on the most famous race course in triathlon.
Quite a few people have asked me since my race in October something similar to: “what was the difference this year which enabled your result?”
I’m confident that the answer is that it was a number of factors that all aligned on race day and not one particular component that made the difference. In saying that, one factor which stands out due to a significant change from what I had done in previous years was my training and race day nutrition.
I made a shift from using products from one major (and ubiquitous) sports nutrition company to using Body Science nutrition products in April 2013, after many years of racing and training with products from the other company.
I hadn’t had any real issues with nutrition in the past, but had still not been able to address some minor problems that tended to arise from the halfway point of the run leg of nearly all Ironman races I have done, usually to do with bloating of the stomach and associated side-stitch.
The products I selected from Body Science to help with my preparation for the Ironman were as follows:
This selection ensured I had the energy to complete each session with the intended level of quality and intensity, as well as being able to back up for the 2nd or 3rd session of the day, or the next day also.
Having to knock out regular 20+ hour training weeks on top of a full time job means that the ability to absorb the training and recover for the next beating is critical.
I really felt the benefit of the Body Science formula in each of these products and I seemed to be leaner AND stronger for race day.
My nutrition protocol for race day was similar to what I had done in previous Ironman events, allowing for a slight adjustment due to the different nutrition profile of the BScFuel products compared to what I had previously used.
The products I used during the race were as follows:
In addition to the Body Science products, I took a lot of bottled water from aid stations on the bike but no electrolyte drink as I find my stomach generally works better without it, so I save it for the run. On the run, I took water, electrolyte drink and (later in the marathon) cola at aid stations.
The protocol above gave me approximately 75 grams of carbohydrate per hour on the bike and slightly less on the run (allowing for the increased difficulty my stomach seems to have in digestion of carbs while running compared to cycling).
End result of all this was my time of 9 hours 48 minutes 8 seconds, a massive PB and my first time under 10 hours in the Hawaii Ironman.
Critically, this was the first Ironman triathlon I have done in the last 13 years where I had no stomach issues during the run at all, subsequently I was able to maintain my goal kilometre pace on the run consistently to the finish line. No, it wasn’t easy, but it WAS doable!
Thanks to BodyScience for a product that for me seems to be the answer to nutrition issues that had impacted my racing until now. I took a risk with using at Hawaii given I had only tried it in training to this point and this was definitely my “A” race of the year.
Knowing the effort BodyScience put into the development of superior nutrition products, I shouldn’t have been worried.