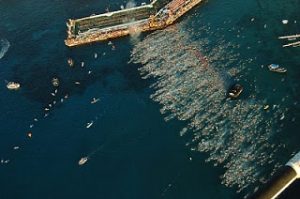 I’ll remember the 2010 Ironman World Championship in Hawaii for the harsh winter in Melbourne, Australia preparing for the race as much as the race itself. Against all odds, this was my fourth go at Ironman Hawaii in four years and another chance to nail a race on the most iconic of courses in triathlon.

The seven year drought in Melbourne finally broke in 2010 and this coincided with my need to do long hours in the saddle of my Cervelo P3 bike to get ready for the race of my life in Kona on 9 October. Over the three months of winter I got at least ten punctures, destroyed four tires, had to replace my wheel bearings (again) and wore out the chain in half the usual time.

This was the coldest, wettest winter I could remember. There was one upside however. After skipping my yearly ski trip since 2007 due to racing in Hawaii and not having any spare leave (or money), I interrupted my training in August to head up to Perisher in New South Wales for a week of skiing with a good mate. And what a week it was – fresh, light snow and a few too many beers and red wine while sitting around the fireplace in the lodge each night. Maybe not the best preparation for Kona physically but I’m sure it was spiritually.

To finally escape the cold and land in Kona on the Big Island was a relief as well as a pleasure. The weather was bit milder than usual with only one really hot day in the week and a half leading up to race day. My main worry was that race day would be oppressive and I would not have properly acclimatised.

I don’t think you can ever get tired of being in Kona, all it takes is the first swim at the pier to feel like a million dollars and fully appreciate the luck of being there again. Running into a pod of dolphins during that swim helps also! It’s a magic place, especially in the week before race week when things are reasonably quiet.

A few days later I did a training run on the Energy Lab road with Aussie pro triathlete Luke Bell and the Tri Travel guys. Despite sitting on a pace slightly above my intended race pace (4 min per km pace vs. 4 min 50 sec pace) I felt great and didn’t back off – until Lukey announced he was going to pick it up a bit for the last few kilometres and I and the other boys let him get on with it. It’s always nice to be reminded of the difference in class between a top pro (like Lukey) and your typical amateur hack (like me)!

Race day started with a 3:30am alarm and a few seconds of dread when I realise that today I’m not getting out of bed to go and practice for the race like I have for the previous months, today I get up and go do the actual racing. This always entails putting your ego on the line, your reputation as well, and facing fears that anyone who races will have (e.g. I will perform poorly and it will be my fault). Of course, the other side of the coin is the chance that you will perform at a level above what you expect, or above what you thought possible – that’s a pretty strong motivator to get you out there and giving it a go!

If I have a weakness in this sport (and I do), it is my swim. Despite being able to swim 57 minutes in an Ironman swim – with wetsuit – the Hawaii Ironman always presents a challenge for me and I just haven’t put together a solid swim result without being able to put on 5mm of neoprene-based speed. My coach JT had fired me up before I left Australia and gave me just one instruction – attack the swim. Which I did, getting out of the water in 1 hour 14 minutes something for my worst result so far in and Ironman (making it my worst in 16 attempts!) So maybe I thought I attacked it.

Onto the bike and quickly putting the swim result out of my mind, I focussed on settling into a rhythm, my Cervelo pimped and primed thanks to CBD Cycles. By the time I reached Kawaihae and the turn off the Queen K Hwy to start the Hawi climb (not far from the halfway point of the 180km bike course), I noticed how harmless the wind had been and wondered what it would be like heading back after the turnaround at Hawi. Not long after, the infamous cross winds hit which are common in this part of the route. Last year they were non-existent and the previous couple of years they were pretty bad but this year was out of control! As I climbed, the leading pro guys started coming past on the descent and I couldn’t help but notice how scared some of them looked.

Once I reached the turnaround at the top of the climb, I strapped myself in and prepared to meet my maker (or at least be blown around a bit) during the high speed downhill. Descending on the bike is definitely my strength and I was determined to take advantage of this part of the bike leg by staying on the aero bars and pushing my biggest gear to try and keep stable. It felt like I was sailing a boat, keeping my weight over the side to stop capsizing. Halfway down I saw a girl lying on the road and not moving, fortunately a police car pulled up to help her out. One of many victims of the wind gusts this day. Once I made it back onto the highway for the long trip back to transition, the winds were more cross/tail which, surprisingly, led to some very fast overall bike splits on the day. End result for me was 5 hours 19 minutes, a 12 minute improvement on my best split here.

If I have a strength in this sport (and I’m not sure that I do) it is my run. Heading out of transition to start the marathon with my Newtons strapped to my feet, I was feeling good. My PowerBar-fuelled nutrition strategy had gone well on the bike and I was ready to do some damage (hopefully not just to myself) in the next 42.2km. I was still wearing my 2XU compression top and arm coolers that I put on before the bike – no point getting sunburnt and ruining some solid poolside time post-race! But despite over-dressing to impress, I didn’t feel hot and was able to keep ticking off the kilometres at a reasonable pace, helped by a bit of cloud cover that was timed to perfection. Eventually I made it onto the Queen K Hwy for the stretch to the Energy Lab and back, at which point a guy who I think was Spanish ran up to me and tried to tell me that he wanted to run with me to the finish (or maybe he was saying that he just wanted me – my attire was pretty impressive). Eventually we reached some sort of understanding and ran side-by-side until a minute later we reached an aid station where I promptly charged through in my usual manner and dropped him, never to be seen again. I’m not certain the 5 minutes of negotiation and translation was really worth it . . .

The rest of the marathon was a mix of highlights and lowlights.

Highlights like seeing some of the guys from the Epic ‘Length of New Zealand’ training camp including Scotty, loving being out in the lava fields 22 years after winning the thing; and Lordy, hobbling out of the Energy Lab wearing his Vibram ‘Five Fingers’ shoes and telling me that his feet were “a bit sore”.

Lowlights like every Ironman triathlete experiences during the run, where you just want it to end. It was also sad seeing Lukey not having a great day but pushing on to finish anyway.

And eventually it did end, in 3 hours 24 minutes, like my bike split a 12 minute PR on the course and the satisfaction of being able to maintain my planned average of 4 minute 50 second kilometre pace. My race time was 10 hours and 8 minutes on a day of some very fast times, beating my previous best at Kona by 22 minutes – despite me ‘attacking’ the swim.

Kona looks far away at this time - but my Hawaiian

Why get up before dawn each morning to train? Why

Starting your day in the water, on the bike, on a