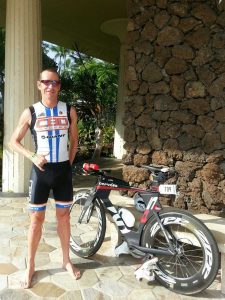 My first Ironman in Kona was back in the day and my bike reflected that – an alloy Cervelo P3 (The Silver Bullet). I still miss that bike.

Since then I have been aboard my trusty steed, Black & White Carbon P3 (I’d call it The Magpie but that has unfortunate football connotations). Very nice bike, very fast and fitted me like a carbon glove.

Until 2013 that is! My Hawaii campaign this year was a chance to unleash my new Cervelo P5-Six on the smooth but hot tarmac that is the Queen K highway. I had been training on the P5 for just a couple of months prior to flying over to the Big Island but knew from these rides that the P5 was a special machine, one that I was looking forward to racing on. The Ironman World Champs was going to be my P5 race debut.

In order to ensure my bike split was given appropriate respect I thought I’d better start the day with a better than usual swim – also given my coach Julie Tedde had finally made the effort to come over and watch the race this year (and she has always been critical of my swim performances in Hawaii…) Out of the water with a new Kona swim PB so first box ticked off!

Onto the bike, my legs felt pretty good right from the start and the P5 was making the fast early pace (with tailwind assistance) seem pedestrian given how smooth and stable it rides. Coming back from Hawi and the long highway stretch from Kawaihae to Kona was into a cross/headwind but my legs still felt good and I dismounted with a new Kona bike PB – Anthony reckoned it was all because of the P5 but given I averaged 10 watts more than previous years I’ll claim part of the improvement! (ed note. i think you were just trying to impress your coach….did you sit down at all on the bike course?)

With the race having gone to plan so far, I started running only thinking about what I had to do to not stuff things up and run a solid marathon to top off a solid day. The gods were definitely with me this year as the sky clouded over as I was transitioning onto the run so I was met with close to perfect (for Kona) run conditions for the duration of the 42kms. I felt really good and my km splits reflected this, right up until the infamous Energy Lab. Having charged downhill into the Energy Lab Road I turned right to head toward the final turnaround and my wheels fell off well and truly. From this point on until the finish (12kms) I struggled to maintain my pace and rhythm and even in the last kilometre didn’t get a lift from the crowd or from knowing it was almost over. It just hurt.

I’m very satisfied with the end result which was a 20 minute PB in Hawaii, and even a PB for the Ironman distance. Thanks to Anthony, Tosh and Miguel for putting up with my demands in the lead up to my departure and ensuring that the P5 was tuned to the max and ready to go on race day. What can I say, nice bike and a worthy replacement!