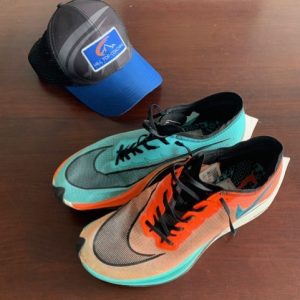 Background of the shoes

Eliud Kipchoge’s attempts at a sub-2 hour marathon as part of the Breaking 2 Project (and success in 2019 at his second try with a blistering 1:59:40) understandably received worldwide publicity. The Nike shoes that were developed for this project have gained a huge amount of coverage too, from the earlier Vaporfly Elite (used by Kipchoge in his first attempt in 2017) and Vaporfly 4%, the improved (and marketed as even faster) Vaporfly NEXT% and now the Alphafly NEXT%, the shoe Kipchoge broke the 2 hour barrier in.

Throwback to October 2018 when I had noticed these weird Nike shoes, bright orange with massive foam cushioning being worn by a few age group athletes competing in the Ironman World Championships in Kona Hawaii that year (I’m guessing they were the Vaporfly 4% given the date). It was in 2019 that the hype was building in earnest about these shoes, with some grand claims about massive performance improvements to be gained by those that could afford them. I’d learned by then that it wasn’t just the thick sole cushioning that made the Nikes fast, after all, Hoka One One had introduced this feature years earlier in their shoes without world records tumbling. It appeared that the innovation was from the combination of the cushioning and a midsole carbon fibre plate that provided stiffening and support to the very softly cushioned sole.

The hype is building

A year later in Kona for the 2019 Ironman World Championships, my pre-race guess was that the Nike Vaporflys would be worn by hundreds of the 2000+ competitors in the race – and I was proved correct! So, what was going on? Was the hype real? After 25 years immersed in the sport of triathlon, I am naturally suspicious of the ‘latest game-changer’ in the sport. For every innovation that provides real benefits (e.g. aerobars, aero helmets, deep wheels) there are innovations that may only work for some people or require patience in getting strong enough to be able to see the benefits (minimalist shoes and barefoot run training is a good example). Then there are the things that just don’t work and quickly disappear once the initial buzz dies down.

After Kona I reached out to everyone in triathlon that I knew who owned a pair of the Nike Vaporflys, from professional triathletes to elite age group competitors (the cost seemed to limit those that purchased the shoes) and asked them if the hype WAS real? Were they faster running in them than any shoes previously? Were there other benefits or draw backs of the shoes (beyond price)? The responses were generally guarded and a bit mixed, but most believed that the shoes gave them some level of improvement. So, there was only one thing to do (no, not rush out and spend AUD$320, but find someone with a pair in my size that I could borrow!)

Thanks to the generosity of my mate John D’Amore (Australia’s wealthiest greengrocer) I had his pair of size 11 Vaporfly NEXT% strapped to my feet and ready for a test on the local athletics track. My aim was to do one of my standard track interval sessions (consisting of 4 x 1km efforts at best pace with 500m jog between each) then compare times with my last similar session while also assessing some subjective factors such as how the shoes felt and how my legs felt afterwards. Unscientific hence the last part of this post is pretty short!

Note that the March test was following Ironman 70.3 Geelong triathlon on 23 February, soon after the comparison session. My fitness felt better for the test so we can’t read too much into the results, although the 3:36 final interval was my fastest for many years.

The Nike Vaporflys are so different from any shoe I’ve run in before. I had previously been supported by Newton Running since 2010 and the Newtons are on the minimalist side of things. The Vaporflys are NOT minimalist, with the substantial cushioning in the sole adding a lot of height to the ride and the stiffness of the carbon plate they have a very unnatural and almost unstable feeling to them. The Vaporflys feel fast and seem to be fast however. I also noticed in the hours after the run and then the next day that my legs felt less sore and less fatigued than I would expect after a fast interval session on the track. This may be a real positive if it allows more frequent training with less recovery time, as well as potentially helping in the back half of an Ironman marathon when soreness and fatigue of the running muscles often becomes a speed limiter.

So that’s my initial review: I have nothing more to add until I actually buy a pair and test them in the crucible that is an Ironman marathon (or maybe a half ironman to start with!). I saw enough in the Vaporflys to convince me that they are certainly worth investigating further.

Stay tuned for another blog post (likely much shorter!) reviewing a similar albeit more training-focused shoe, the Nike Zoom Fly 3. A pair of shoes I actually went out and paid for and have been training in for the last few months so I’ll be able to provide more of a long-term assessment.