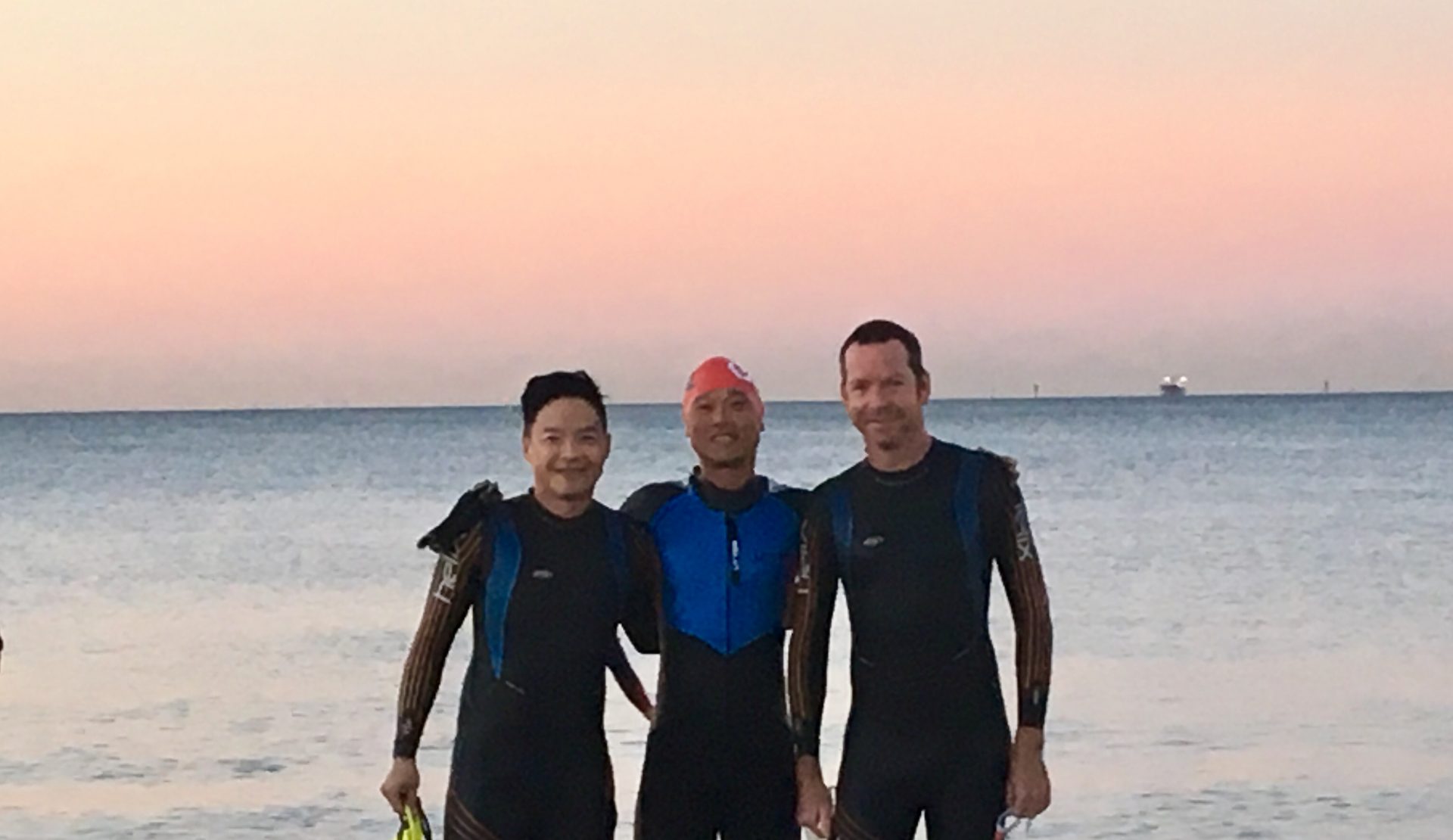 Two years of waiting, one aborted qualifying preparation last season, one successful ½ Ironman qualifier race this season and months of intensive preparation and here I was back in Forster – on the start line for the big come-back Ironman.

Photo thanks to Xtri.com: Macca running to his first Ironman win at Forster 2002 – I was a touch further back . . .

Having lived with the pain of dissatisfaction and self-doubt regarding my mental strength, if not my physical strength since April 2000, I was very focussed, quietly confident and ULTRA determined to give it 110% this day. 2 years ago my main goals were to run the whole marathon, finish in daylight and I thought I could do somewhere around 10 ½ to 11 hours. This time my goals hadn’t really changed – run the whole marathon, definitely finish in daylight and maybe achieve a 10.15 to 10.30 time. The main difference this year was knowing what to expect, how hard it would be and having confidence from coping with doing more training much better than I coped with the less training I did for my first IM.

It was more fun this year, there were four of us from work competing and a few others I knew: training buddies, people from swim squad, etc. to trash-talk with in the race lead-up, keep an eye on during the race and exchange “war stories” with afterwards.

Anyway the race start was approaching fast, I was attired in work-logoed speedos and singlet under my wettie (flying the corporate flag even though the only viewing the speedos would get is for 2 seconds in the transition tent before they are ripped off and replaced by work-logoed bike shorts – maybe a tattoo on my ass would have been better). I was determined to tear through 2 fast transitions this year because in 2000 I took about 7 minutes for each. So I was dressed like it was a sprint distance race and ready to rock…..

6.15am the gun goes off (not really a gun, just some strange noise and everyone looks at each other and then the race announcer says something which I took to mean “what are you waiting for, the race has already started”) and suddenly I am in the thick of it, battling for swimming space.

I had a good strategy in the swim: whenever someone hits you or swims over your legs – relax, smile and kick/swing hard to make sure they don’t go anywhere near you again. It seemed to work too as I had a reasonably clear swim, went a bit wide early but was on the buoy line for the second lap and apart from a stitch at the 2k mark everything went to plan and I was out of the water in 1.04.55 (3mins faster than 2000).

Caroline was standing near the swim exit cheering and I was pretty pumped (I enjoy a morning of stroke work with 1400 friends), grinning from ear to ear and happy with how I felt at this stage of the race.

As planned I raced through transition so fast that by the time Caro had got to the bike enclosure fence I was gone (that will have to be a regular goal from now on for future IM races…). Mounting the steed, I was quickly into a rhythm and the new 42 tooth chain ring I put on a week before was going to get a good workout. My bike strategy was firstly not to get pinged for drafting, then drink heaps so I need a first AND second lap piss and finally to stay in the small ring for at least the first lap (excluding the long downhills) to ensure I don’t ruin my legs for the second lap and the run. Well it felt so good I decided to use it for the 2nd lap also (soft!!).

Back into town to end the first lap I got a boost when passing my cheer squad and the bike speedo showed an average speed of 35kph – great, 5.15 bike split here I come – and was suddenly back out of town for the 2nd lap – straight into a headwind… The wind was light but I just couldn’t maintain the earlier pace and this started to get to me.

I was carrying 2 gel flasks on the bike along with a PowerBar stuck to the top tube in bits and the remaining carbs I was going to get from the sports drink. I had worked out my energy requirements down to the gram and knew this would be perfect….and it would have been if I hadn’t lost a full flask at some stage. I was a bit worried but thought if I drink more High 5 drink and have a dodgy aid-station banana I will survive OK. Another bout of stitch and my back was getting a bit stiff but otherwise all was well. I passed team-mate Dennis with 40ks to go, spotted a FULL gel flask on his bike, asked for some compassion (and gel) but got neither (something to do with an incident at Forster ½ IM in November – although the excuse is he thought I was joking – ha ha).

So I rode onwards to the bike/run transition and back into town I checked the speedo and was down to 33.5kph, same as 2 years ago and pretty weak but on the bright side I was feeling OK and looking forward to the run!?! 5hrs 33min was a bit slow and my Hawaii dreams had all but evaporated but there were more important fish to fry.

It’s funny how for weeks you do your long runs at 5 minute per k pace (easily), talk about how you’ll do 5 min k pace in the race because you’ll be so motivated and then you get off the bike, put your shoes on and, heading out on the run, start laughing at how stupid you were thinking that you could do anywhere near that pace. The hardest thing in any triathlon is running strongly off the bike. The impossible thing in an Ironman triathlon is running strongly after the 180k bike leg.

I shuffled along for the first few ks, recovering from my usual foot cramps I get after a long or hard bike ride and then got into a sort of rhythm and began the long haul to the finish line. My first goal was to get past the 14km mark (the point that I started my 14k walk in 2000). This didn’t seem to take too long, I was running through the aid stations and up the hills, determined not to walk even one stride. I won’t say I was comfortable but it was a lot easier than last time. My next goal was to keep running for the whole first lap (they give you a coloured scrunchy at the end of the first lap to show who is on which lap, not for your ponytail but for your wrist/arm).

Back past the finish line to end the first lap (very cruel run course), I was handed the scrunchy and mentally ticked off another goal met. My watch was playing up all race so I couldn’t check my run pace but it seemed close to 5min k pace the first lap and then the wheels started to fall off. I had started hitting the coke at the aid stations by the 10k mark (it gives you a real boost but you feel flat quickly afterwards so once your on it, you stay on it). After guzzling a couple of colas at the 23k mark I started to feel tight in the guts and suddenly my friend the stitch returned but this time in earnest. I was holding my side, trying to keep running, trying numerous breathing exercises and thinking that if I can keep running it will go away. This was definitely the low point of my race and I came VERY close to walking at this point.

My memory of what happened after that is a bit dim, the stitch went away after a few kms, I couldn’t regain my earlier pace but I was still running and getting closer to the finish with every stride (shuffle). 1 km to go, 3 or 4 people ran past me and I couldn’t respond, just had nothing left to increase my speed and was hoping I wouldn’t cramp up so close to the finish.

The last 600 metres is dead straight, downhill and ends with the famous Australian Ironman finish shute with hundreds of spectators lining the whole straight. A few people noticed my scrunchy and realised I was one of the minority running past that was about to finish – and I got a lot of support. I high-fived a couple of people but nearly got knocked over by the impact (I was pretty weak at this stage) and thought better of it. Then I was over the line, arms raised in triumph, sun glaring in my eyes (yes, it was still daylight) and then I was being held up by the volunteers, being asked my name (took me a while to remember) and that was it – all over for my 2nd Ironman effort.

And not that long after finishing I remember thinking “hey, I’ve actually RAN my first marathon” (ended up breaking 4 hours with a 3.58 run split.) Overall time was 10.37.28. No Hawaii, no sub 10.30 or 10.15 but ran the whole marathon, finished in sunshine, gave it 100% (and more – at least during the run) in the process exploring the absolute depths of my mental fortitude and ended up qualifying for next year’s Ironman Australia.

I think I have now learnt what the whole Ironman game is about, it’s not breaking 11 hours, or 10 or 9. It’s not qualifying for the World championships in Hawaii, or doing a personal best. It’s about getting to the run after pushing yourself for 6-7 hours and then fighting through the inevitable lows and leaving everything you have out on the course so you know at the finish and the next day and the next year and perhaps for ever that you gave it everything you had.